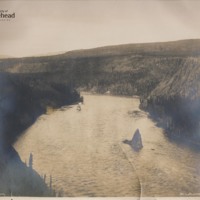 On August 16, 1896, gold was discovered at Bonanza Creek in northwest Canada, launching the 1897-99 Klondike Gold Rush. Word of the discovery did not reach beyond the area until the miners started returning with large amounts of gold.

Beginning in 1897 tens of thousands of hopeful adventurers from all over the globe and all walks of life set out for the Klondike goldfields. Most had no idea where they were going or what they would face along the way. All they knew was based on the tales of returning miners and the steamers' cargoes filled with gold. The media encouraged the dream. Stories of ordinary people striking it rich in the north were in every headline from Seattle to San Franciso.

Several commercial photographers made the harrowing journey to the goldfields and set up studios in wagons or tents and captured this historic frenzy. Many of their photographs and albums are now housed in archives.

One commercial photographer's album resides in the Lakehead University Archives. Henry Jacob (H.J.) Goetzman, an American from Rochester, N.Y., came to the Klondike in 1897 at the peak of the gold rush with his wife, Mary, and daughter Edith. Goetzman's studios operated until 1904 in various locations, beginning in a tent in Dawson City.

The images were taken between 1897 and 1905 by Goetzman and his wife with large format cameras. Photographs recorded the scenes of the journey from Seattle to Dawson, life, and events in Dawson and other settlements in the Yukon Territory.

Goetzman sold prints, portraits, and released photo albums such as “Enroute to the Klondike Gold Fields", "Klondyke Souvenir" and "Souvenirs of Gold Commissioner's Office, 1898 - 1905 with views of Dawson City and the Goldfields."

Goetzman would inscribe negatives, often with titles, dates, negative numbers, and his name, and these inscriptions would appear in every print made. Inscriptions are a valuable resource in not only describing the images but also as a way of tracing his route through the Klondike goldfields.

This exhibit features 32 photographs of an album of 40.